Tail between his legs, US President travels home


Welcome Home, Comrade Trump, or should I say “Putin’s fool.”

The GSEs and the “Big Orange Baby” (nothing good connected, just that I write about both in this segment).

The President’s behavior and antics are far more disturbing than the current GSE malaise and that sorry mortgage finance state.

But then I see very little to brighten the hearts of those who believe in Fannie Mae and Freddie Mac and their effectiveness/success as the primary ramparts of the nation’s secondary mortgage market.

Metaphorically speaking, that’s the GSE bus you see in your rearview mirror, smoking, wheezing and “geezing” its way into history. It's being driven to the Treasury/FHFA chop shop where the government will dismantle, ferret out the pieces, and fuse them onto something which they claim can do the job but won’t be able to do so as fairly for consumers (remember them, Republicans?), efficiently, and as cheaply as could be done by making rather small changes to the current Fannie/Freddie model.

Once again (how often will I write this line) the federal courts have embraced the Judge Lamberth decision, shorthand: i.e. “&^#% considering the Fourth Amendment, the federal government can do anything it wants to the GSEs.”

So opines one federal judge after another.

I know!. There still is Delaware and Sweeney, and our friend Tim Howard believes there is hope in the value to the Treasury of their GSE warrants, representing $100 Billion or more to a Trump Administration, which is spilling red ink at record levels and could use a fresh $100 Billion in revenue.

Still, viewing recent developments, non-players are left sputtering, swearing, pointing to the collective eloquence of the plaintiff’s statements and analyses and holding bubkis in our hands!!

In the meantime, the AEI puts together a daylong conference critical of Fannie and Freddie for "charter creep," i.e. trying to serve more families via credit expansions.

As I emailed a media person after the first reports of the AEI conference:
“What I find so unusual is that the AEI doesn't name names. Who is it--besides FHFA and the evil D, Mel Watt--who is boosting these GSE devils?
It's nobody on the Hill, nobody in the media, not the federal judiciary. Is it really only Rob Zimmer and his community/civil rights groups?” 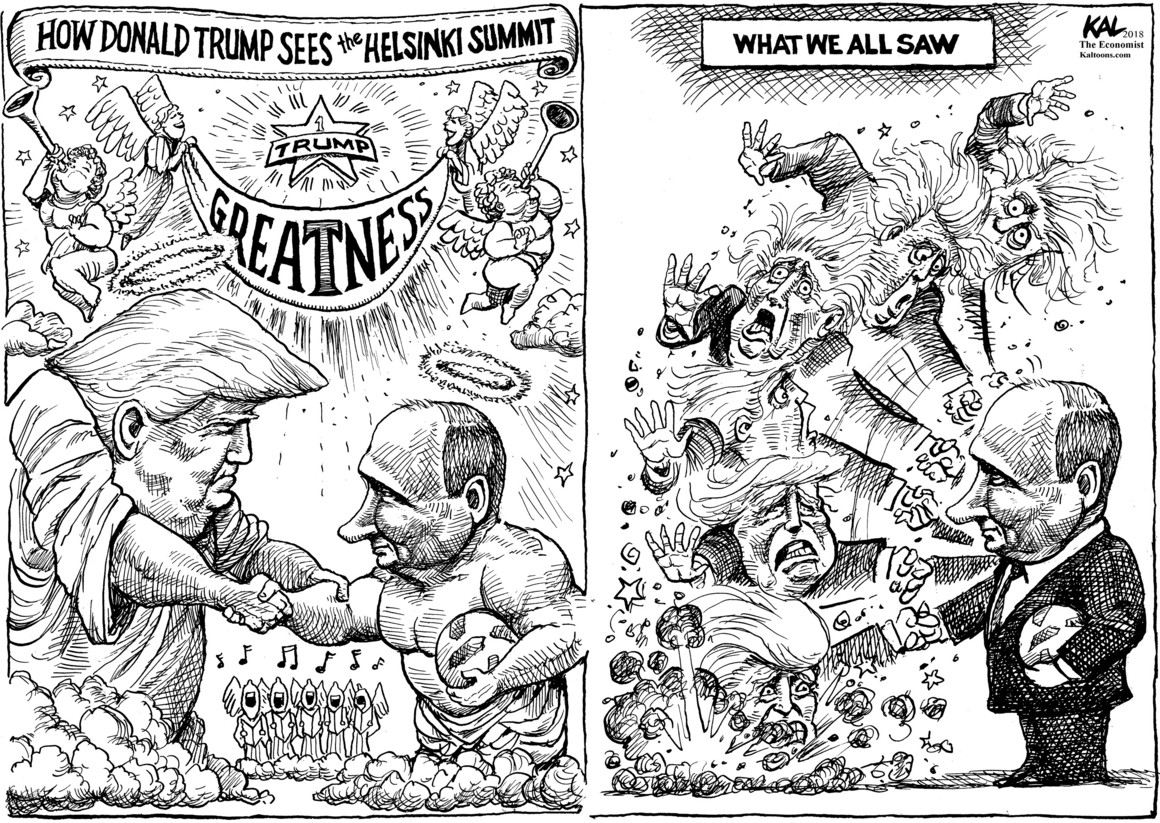 Nothing I’m writing is unique, hasn’t been said and written, a few hundred/thousand times before, but President Donald Trump had an embarrassingly horrible trip overseas, first with our NATO allies, and then in Helsinki with Vladimir Putin, who remains the thuggish, lying, manipulative, and deceptive leader of—hands down--America’s greatest national enemy, Russia.

We know President Trump didn’t prep for these meetings because he doesn’t like to read and instead, trusts his own instincts, which at any moment could be disturbed by his Big Mac heavy diet.

One might think the man who describes himself as a “great deal maker” and also self described “one of the smartest Presidents ever”-- because he went to the best schools—would remember US or international history for the past 70 years, and see the Soviet Union or Russian—in the opposition to the US--in the middle of every war, regional rupture, since WWll, including the Korean and Viet Nam wars, invasions of Hungary, Czechoslovakia, certainly the Ukraine, and all of the Middle Eastern conflicts, plus so much more.

Russia (now) and the Soviet Union then, has a  history as a country of have-nots, save for their constant wars, pogroms, revolutions, etc. which means for centuries false dealings and blood have drenched their national history for centuries.

It’s a nation with years of having nothing, including sufficient food for its people, and no rule of law. It has no reliable government, just oligarchs and thugs. All they do is take (usually steal), cheat, con, and flim flam.

No modern American president has trusted a Russian leader to do anything but prevaricate and misbehave.

But Mr. President you seem to love Vladimir Putin; you seen to trust his words over those of our own intelligence agency heads —make that your own, since they all are R’s you’ve appointed—who to a person don’t seem to trust Putin or Russia as much or in the way you do.

You woofed at our NATO allies; afterwards pretended you had forced them to pony up more money for the operation, but then scuttled like a scared puppy under Putin’s lash, even though he kept you waiting 40 minutes to deliver his personal “golden shower” to your presidency and person.

Who needs the British secret agent dossier when the world could see you on television in all your obeisance?

You were quite a chicken in your Helsinki embarrassment or as one observer put it, “Trump talks like a lion in his tweets but acts like a coward in the streets.”

When you returned home you sought to hide your shameful actions by lying and pretending you tripped over just “one word.” (How about the 25,000 other words about Putin and his strength and character?)

Trying to dupe the American people further, you then sent “Biscuit” Sanders out to do her song and dance blowing praises up your skirt and lie some more.
Now, it looks like you plan to invite Putin to come visit your “hood,” have a sleep over,  and play with you, again?

Have you missed being urinated on this soon, or maybe you want to offer him our flag on which he can wipe his feet?

Maybe the GOP controlled Congress will bail you out by passing a resolution opposing a Putin visit, until at least you tell them and the American people what you and Vlad discussed behind closed doors, with only two interpreters present?

Here are some spine-building suggestions for the Congress from the Washongton Post's Alexandra Petri.


But, if nothing dissuades you from this path, the NYT’s Maureen Dowd has some DC venues ideas for Vlad’s visit from Maureen Dowd.


How should we respond to all of this DJT-crap?

My advice has been consistent. A large majority unhappy American people should vote against every pro-Trump candidate running for Congress and your state houses; taking the Senate is a long shot, but if the D’s can win the House and stay together, they can frustrate many of his initiatives and actions which disturb us today and which run counter what we believe is solid public policy and proper executive action, which doesn’t only benefit the wealthy and the Right.

Register and vote, urge every person you know to do both, and financially support some of those candidates running against Team Trump.

I know it’s Civics 101, but as we’ve come to learn in the past 18 months the fate of our country is at stake, so heed the advice or don’t complain.

(Note, this blog was written on Saturday and Sunday but delayed until today by my production error--thank you Mr.F for helping me fix it--and then a power outage, today, in the Washington suburbs. So, I didn't comment on the very predictable Trump attack on Iran and the D national security holders, two obvious presidential attempts to steer eyes and minds away from his woeful international antics. Look for more of the "don't look at me, just look at them" DJT game.)
Posted by Bill Maloni at 4:58 PM 12 comments: