First they came for the Socialists, and I did not speak out—
because I was not a Socialist.

Then they came for the Jews, and I did not speak out—
because I was not a Jew.

Then they came for me—and there was no one left to speak for me.

Martin Niemöller (1892–1984) was a prominent Protestant pastor who emerged as an outspoken public foe of Adolf Hitler and spent the last seven years of Nazi rule in concentration camps.


Benjamin Franklin: “We must, indeed, all hang together or, most assuredly, we shall all hang separately.”

I told you they would be healthy and very good (but likely not impact the stock price—which swings to different music), with Freddie earning $4.8 Billion in 4Q16, more than the $2.2 Billion it earned a year ago in the same period. Freddie Mac will send $4.5 Billion of that to the Treasury’s General Fund (unless someone in the new Admin holds up that dividend scheduled for March).

Fannie, which announced numbers a day later, topped Freddie and will send $5.5 Billion to Treasury next month, with the same pregnant caveat noted above.

But the healthy totals beg the question I posed in last week’s blog and now other people are raising, given Steve Mnuchin’s statements.

The Trump Administration, too, will need revenue and the GSE’s contributions ($10 Billion this quarter!) could look very appetizing to their OMB numbers crunchers (as they did to Obama’s).

Secretary Mnuchin’s in-the-works plan to release Fannie and Freddie from government control and return them in some substantive way to market operations and private ownership involves a lot more than ending the current lawsuits Treasury faces and working on a possible settlement (which likely takes money from the Treasury’s General Fund, near term).

One huge way to justify fully operational GSEs--which some quant should be able to monetize--is to “socialize the costs” of a GSE resurrection to counterbalance those who will claim breathing life into the GSEs will cost the taxpayers.

Added to these financial bennies are the major political socio-economic gains for the “forgotten man” (Trump campaign phrase) who DJT campaigned saying he would help and on whom I believe the Obama Admin’s GSE antics turned its back.

Those ignored  folks generally won’t see their super market costs go down when DJT threatens to build the Wall or when he argues with the media or Congress over Washington leaks or Russian his contacts. But making it easier for this politically important demographic group to buy a first house or refinance their current house, positively, would hit home (pun intended).

(With the possibility that GSE related expense could diminish the Treasury’s General Fund, I guess it’s a good thing DJT is bringing onboard all of these additional “Generals.” Groan! Sorry, couldn’t pass it up.)

Now that the courts have ordered the federal government to make more documents available to GSE plaintiffs’ lawyers--and some showing some truly sketchy actions by Obama White House/Treasury officials--the cases against the government look stronger and stronger.

There are around 11,000 government documents which still could be revealed, but how many would be needed for the Trump Administration to see they want to stay far away from this reeking legal and political albatross?

Hopefully, it wouldn’t take this Treasury and this DoJ much time to realize matching any of the obfuscating Obama actions makes this case theirs.

I also hope the White House and Sweeney and Appeals Courts aren’t engaging in a legal/procedural “Alphonso and Gaston,” i.e. "you go first, no you go first” choreography.

Nit-picking, a few weeks ago, I offered up my personal perspective of how many senior government, congressional, and media officials, charged with knowing mortgage finance history and issues, just don’t, but continue to disregard facts or utter phrases they don't understand.

I was struck this past week, when Fed Chair Janet Yellen testified before Senate Banking Committee Chairman and its Chairman Mike Crapo (R-Idaho) kept claiming Fannie and Freddie were in “receivership.”

Uh, no Chairman Mike, “conservatorship,” is not “receivership.” There is a huge difference as you, a Brigham Young undergrad with a Harvard law degree, should know or your senior staff should have told you.

Yellen did Crapo a grand favor by ignoring his mistake, not correcting and embarrassing him.

Senator Crapo, here’s a reminder for you and your SBC staff.

Source: Value Plays, 2014 (An unattributed quote, the author of which I would like to give credit but can’t since I don’t know she or he!) discussing the difference between receivership and conservatorship.

I won’t pretend to know what Calabria’s latest GSE views are, but some of you might remember this useful paper (available on the always reliable “GSE links”) that he co-authored two years ago.

What I don’t understand is why the President waited two and a half weeks to fire Mike Flynn (I mean ask for his resignation), when DJT knew Flynn had talked with the Russians on matters that weren’t Flynn’s responsibility.

To me, that is the major Flynn issue, with lying and changing his story to VP Pence and others, a secondary violation.

But, could Flynn—at DJT’s request-- have been talking to the Russians months ago, possibly discussing removal of the US economic sanctions in return for Putin’s help defeating Hillary Clinton?

Man, if I was Chairman of the House Oversight Committee, Jason Chaffetz (R-Utah), I would be all over that one like flies on Russian stink, like an alky on booze, a stallion on mares, or as he was on HRC on Benghazi!

You get the picture. 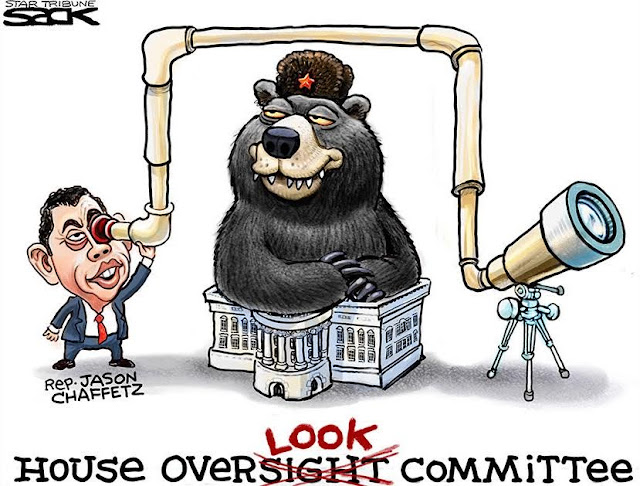 I’ll yell, again, “Republicans in Congress, it’s the Russians.” Wake up, these are the guys--with cause-- you’ve hated for most of the past 70 years”

Their government’s intent hasn’t changed much.

When will it click with the GOP congressional leadership and rank and file?  Do all of your constituents trust the Russians and believe they only have goodwill in their hearts for their new orange-haired American friend in the White House?

So, what are you going to do about it?

This isn’t a new partisan theme for me, I badgered President Obama, John Kerry, and other Democrats about it often.

Russian leaders have no interest in US success, its citizens, or its welfare, except what they can literally steal from it, squeeze out of it through their criminal behavior, or deliver pain and disruption to our national and international aspirations—and, to be very fair, all of that was Russian SOP long before Donald Trump was elected President last November.

So now Putin sends a spy ship to the waters off Connecticut, deploys a new land based cruise missile likely in a treaty violation, welcomes an Iranian General to Moscow—on whose hands we say there is “US military blood”—and whose visits there are forbidden by UN sanctions, and Russia continues to harass and dangerously buzz our airplanes and ships.

How will our new President—who chided Barack Obama over being too lenient/weak with our nation’s enemies—treat these Russian provocations??

If the President does nothing, he adds to the rumors that the Russians have damning (“blackmailing”?) material on Trump, Flynn and “others” in the Trump White House and inner circle.

Please don’t snicker and discount the old spy craft meme, “We have dirty pictures of you,” which Russian operatives regular used to blackmail visiting US diplomats, corporate executives or their employees, tourists, and western media methodically and premeditatedly caught by Russian security services on camera dallying with their Russian-supplied lovers.

The practice is called a “honey pot” trap.

What is Putin Holding Over Whom??

I think Putin and his thugs believe, they now have White House “hollow man,” who they can buy off with lies, intimidating threats, and possibly sugar, i.e.  green light emoluments for Trump Inc. investments in Mother Russia hotels, golf courses, ski resorts, etc. (“Quick, send Donny Jr. and/or Eric scampering to Russia, with a full Secret Service contingent, again, to conduct family business and spend taxpayers’ dollars, as Eric did recently in Uruguay!”)

That’s one Putin/Russian Mother I wish this Congress/White House would plow under and bury!!

To support President Trump, as well as the United States, I urge President Trump to give a speech in which he communicates with the American public/voters explaining what his presidential Russian aspirations are and how he hopes to achieve them.

That might clarify and mute some of the ugly things happening around him and being suggested about him and his Administration.

Really like what I've read about General H.R. McMaster; if he's legit, it shows me DJT can bounce back from a dud (Flynn) and choose some quality.

As noted in my blog GSE segment, I hope we need more "Generals!" ;-)

Hey Bill...looks like the Perry appeal went against us. You have any initial thought(s)?

Just got home from my hospital volunteer gig; will begin reading the opinion and try and post something soon.

First look, it's not good on a few fronts for pro-GSE crowd; adds huge pressure on Mnuchin.

I am flabbergasted by today’s Appeals court decision, but……I’ve written frequently about the height and depth of the anti-GSE “Shot Wall” inside the Beltway this is just the most recent example.

Two learned judges seem to ignore the facts and history and somehow concur that the government can do whatever it wants to Fannie Mae and Freddie Mac. I have no other explanation, given what I thought were outstanding arguments presented by plaintiff’s lawyers establishing the opposite.

I can’t sugar coat my feelings—as a non-lawyer*— legally this leaves only an appeal to the Supreme Court of the United States (SCOTUS) for justice; but readers should remember that’s never an automatic. The SCOTUS could refuse to hear the case, which is what the entire anti-GSE crowd will be urging.

My friend Gwenn Hibbs, who is a very good lawyer, did have this observation, she shared with me, regarding some uncomfortable “legs” this decision could have.

As the dissent so eloquently points out, the precedent set here could eventually imperil financial market stability: “Now investors in regulated industries must invest cognizant of the risk that some conservators may abrogate their property rights entirely in a process that circumvents the clear procedures of bankruptcy law, FIRREA, and HERA. Consequently, equity in these corporations will decrease as investors discount their expected value to account for the increased uncertainty—indeed if allegations of regulatory overreach are entirely insulated from judicial review, private capital may even become sparse. Certainly, capital will become more expensive, and potentially prohibitively expensive during times of financial distress, for all regulated financial institutions.” P. 27, dissenting op.

Of course, Treasury Secretary Steve Mnuchin still can come forward with his plan to resurrect the GSEs, but I feel some of the urgency has been removed by today’s ruling and also Congress could/should feel emboldened to interfere since—as I have written too often these past few years—we still have not had one federal judge issue any opinion supporting the GSEs.

*What I don‘t know, but suspect, is the implication—perhaps fatal—the Appeals Court decision represents for the remaining few GSE cases (think Sweeney and Delaware).

I do know, it sucks to be us today and I don’t know if the Trump White House, Treasury, and Department of Justice, can/will ride to the GSEs rescue?

I added something to the above that somehow didn't make it into the comments seciton.
I noted, since it is a "Maloni blog, it has typos.

The ones I identified were in the first sentence of the above comment and then in the actual comment, it should be "SHIT WALL," not "Shot Wall."